This review will be about the 5 color eyeshadow palette from BOB from Born Pretty Store. When I saw this eyeshadow palette on their online store I really liked the color combination and thought I should give it a try! I'm a really big fan of those brown and copper tones for eyeshadows. 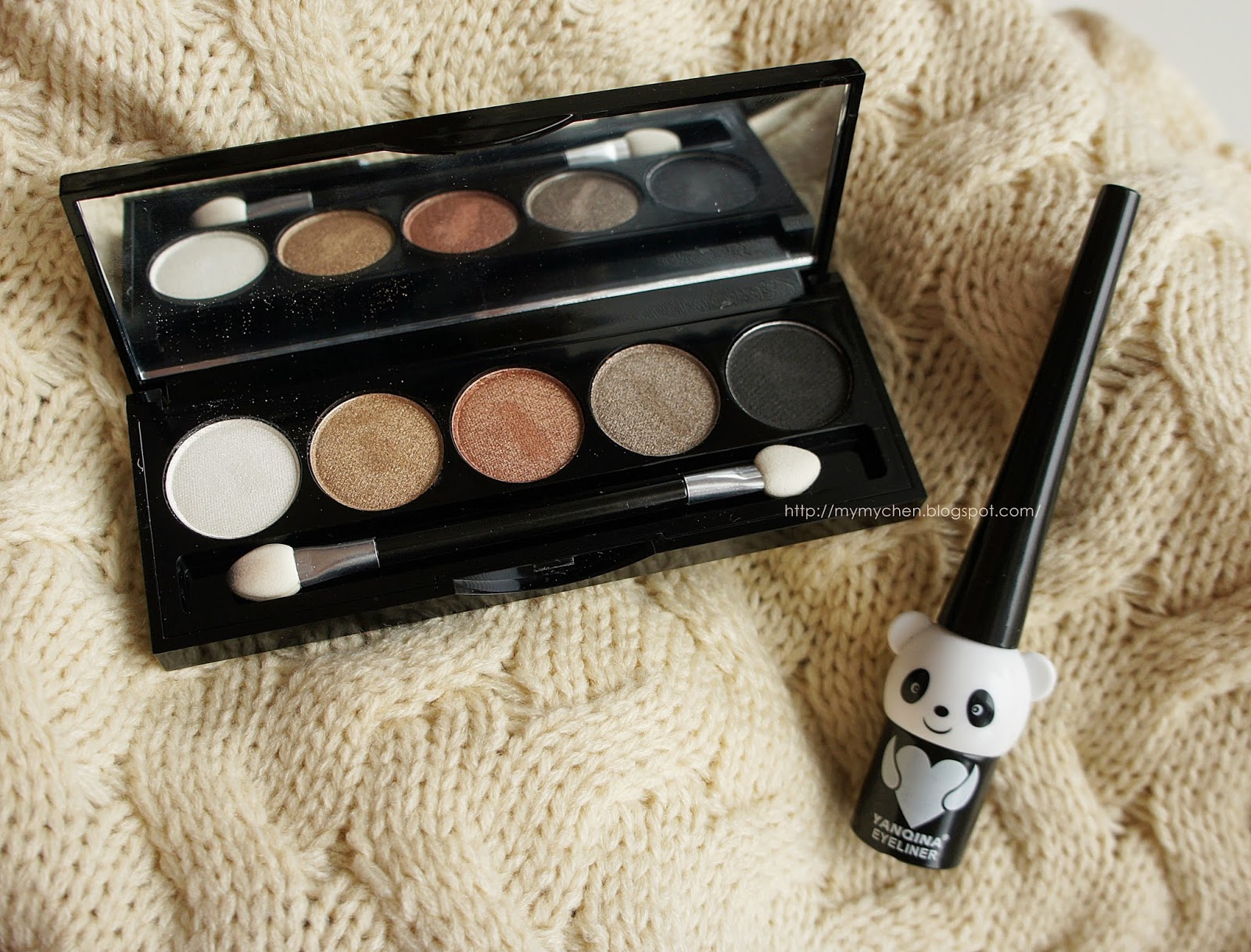 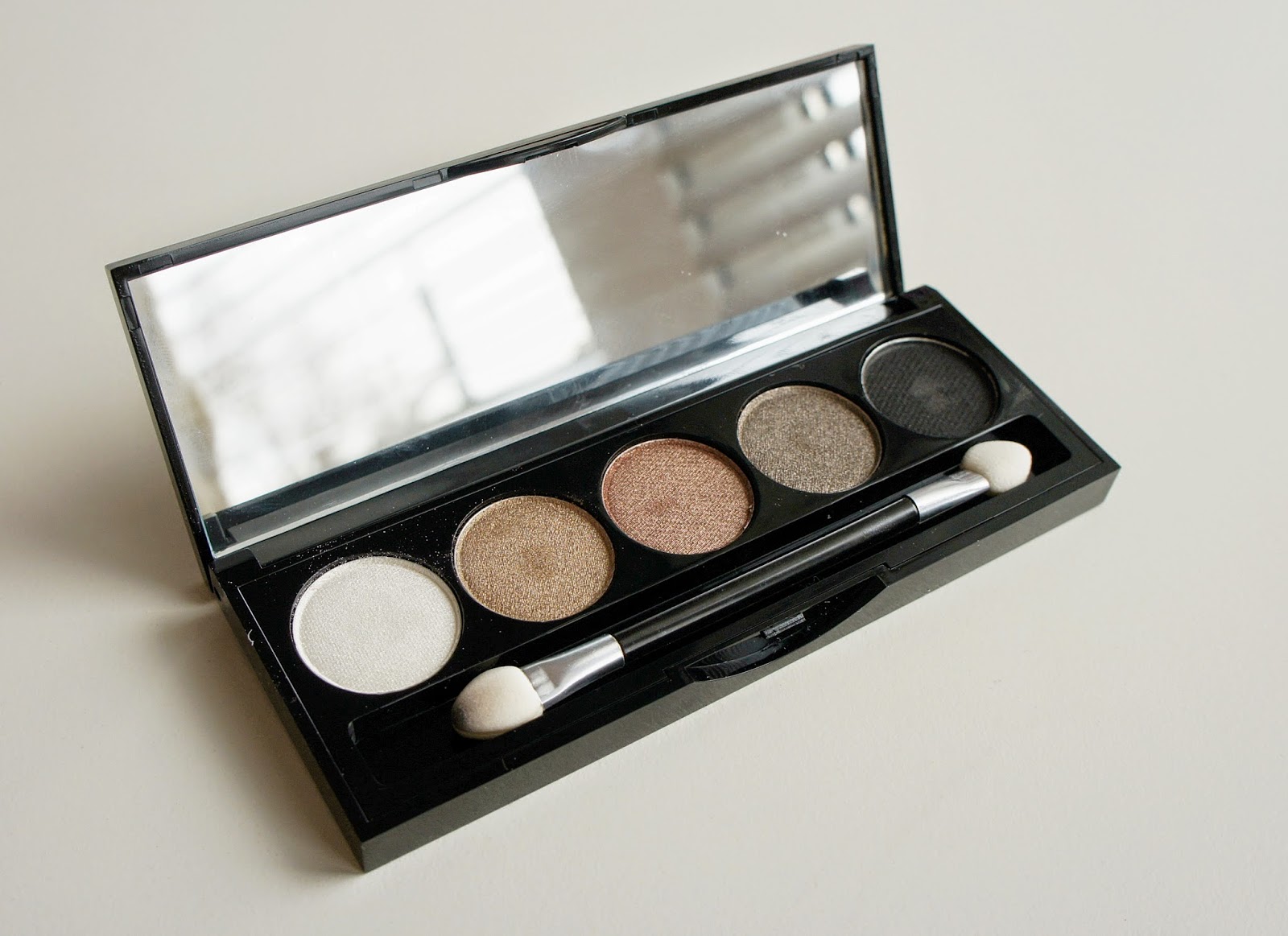 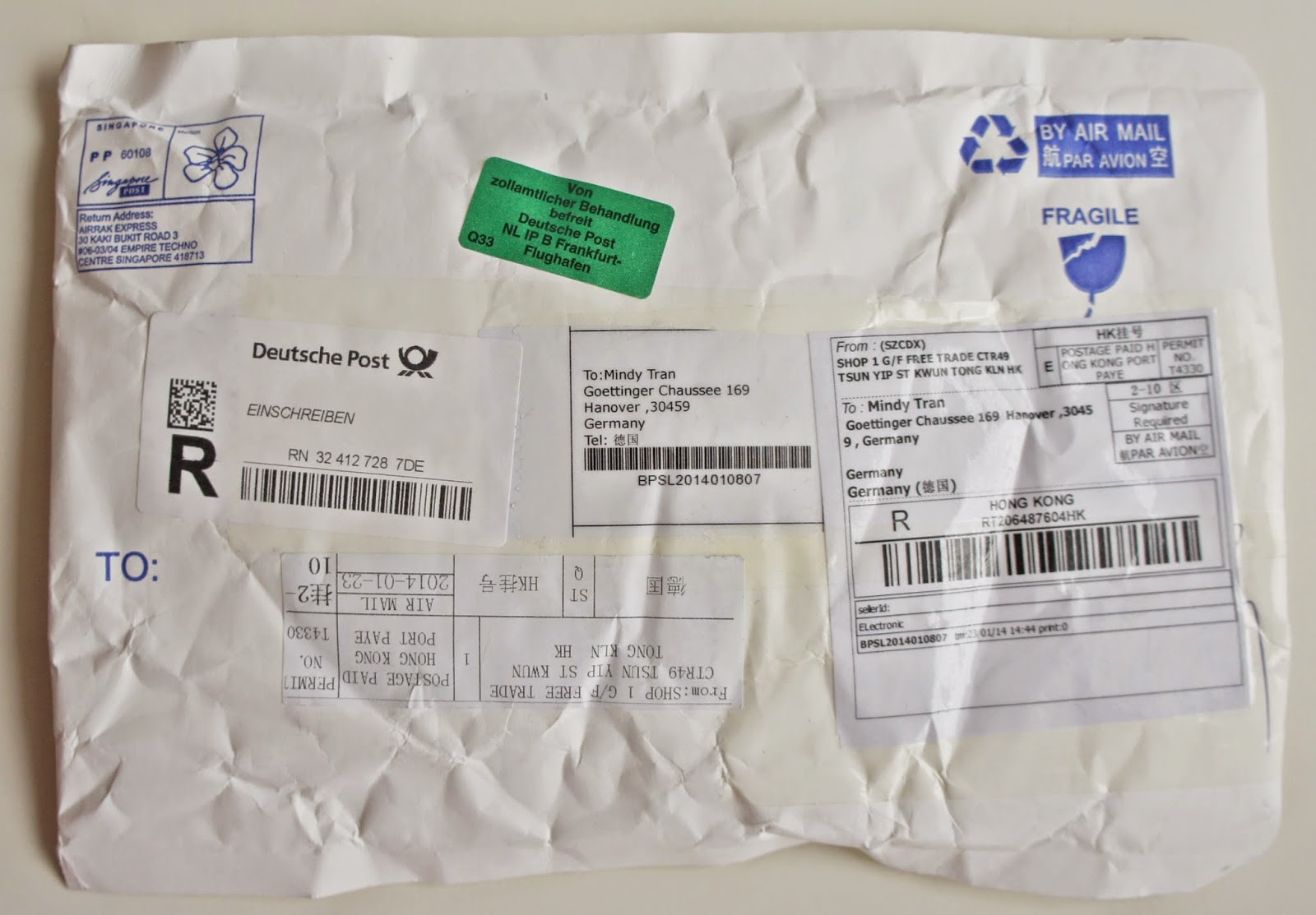 Photos of the packaging 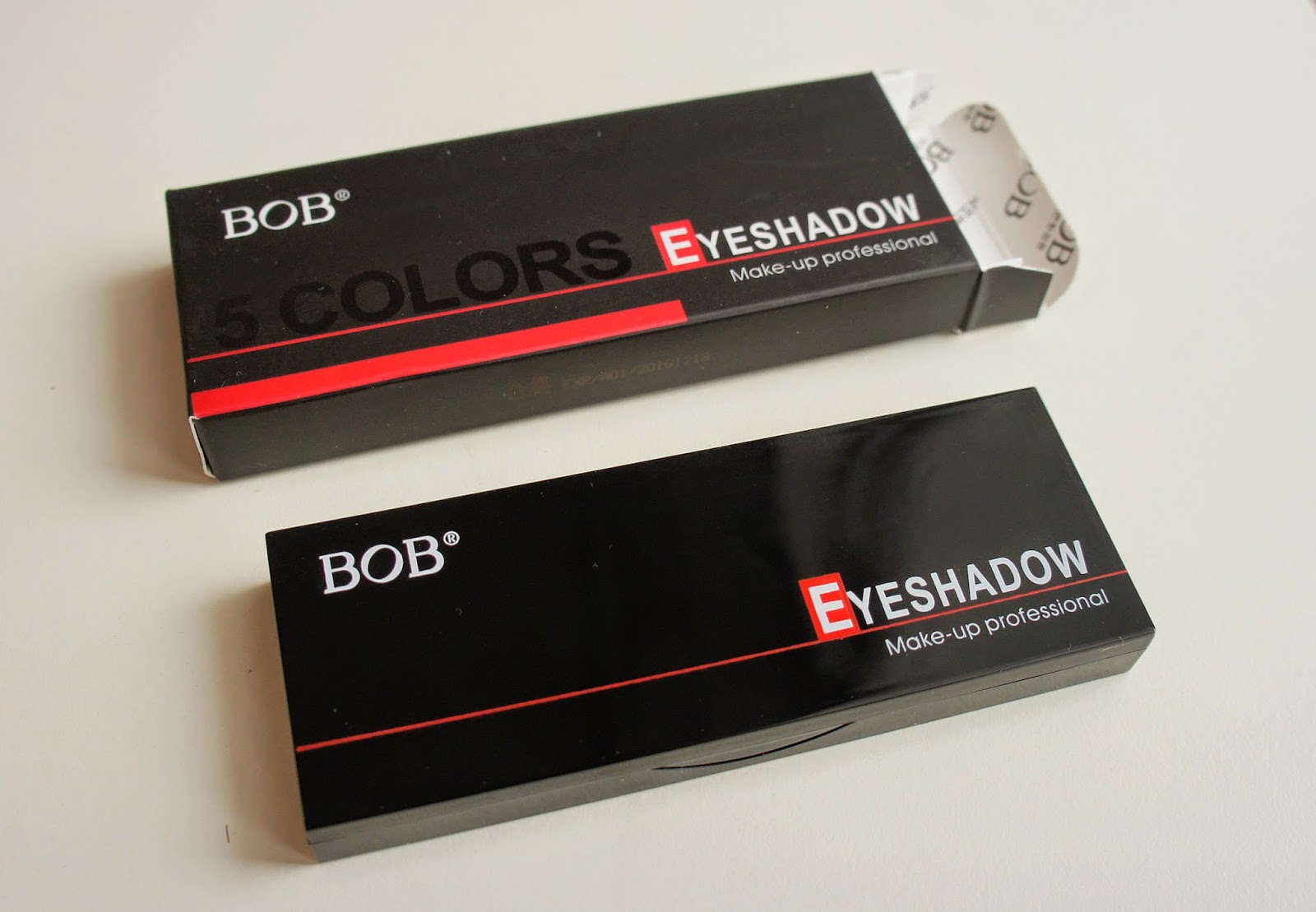 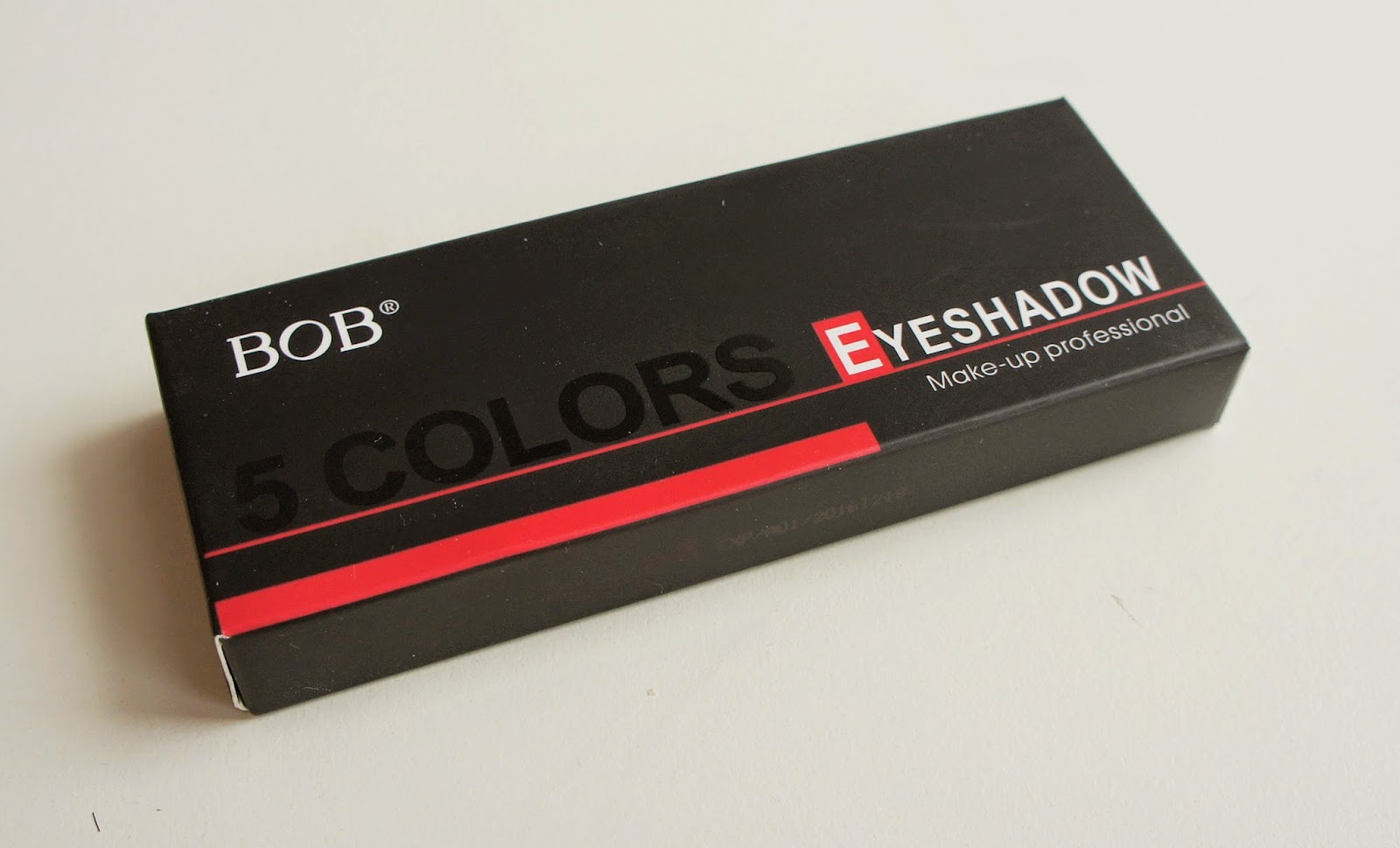 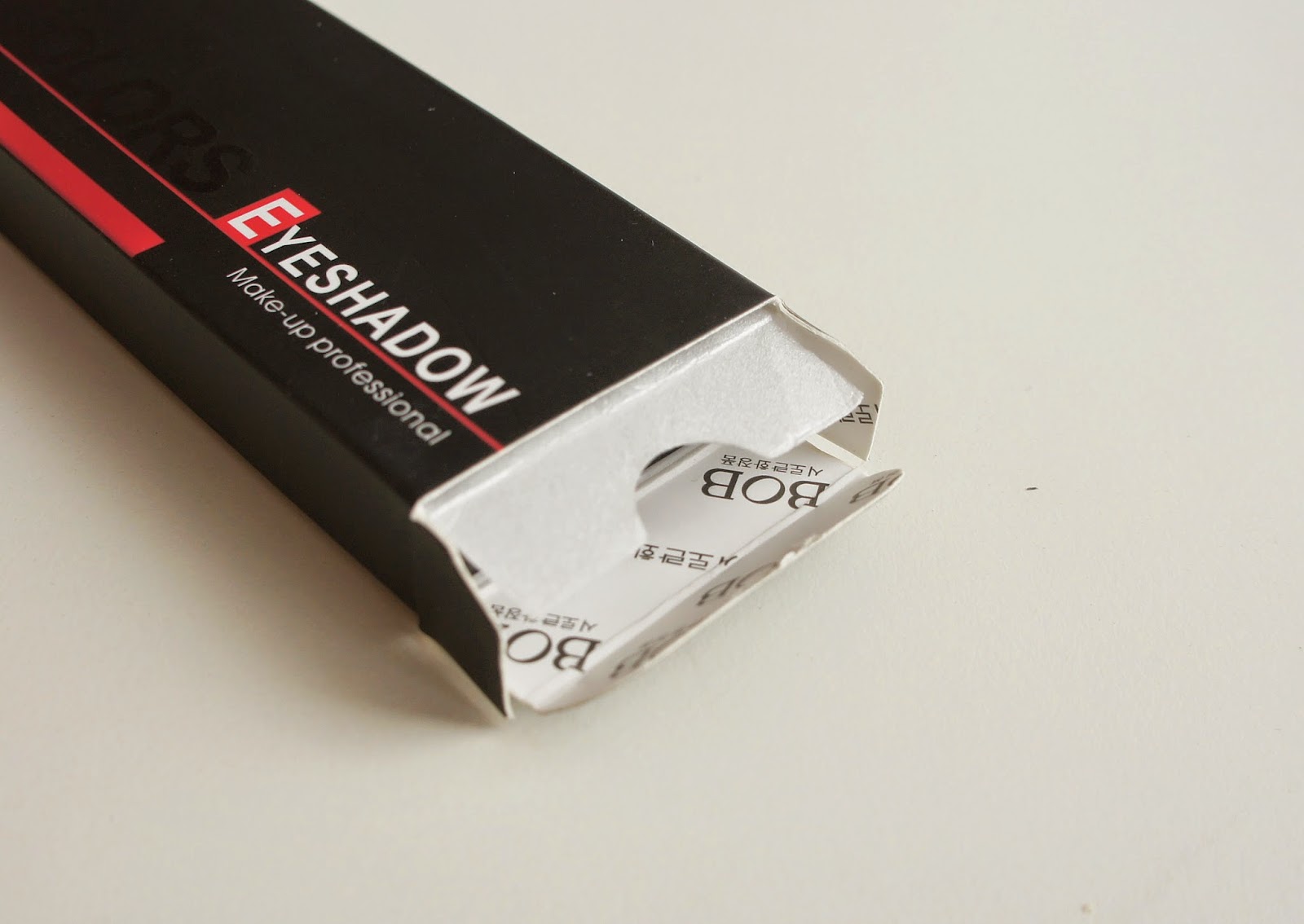 Photos of the eyeshadow palette case 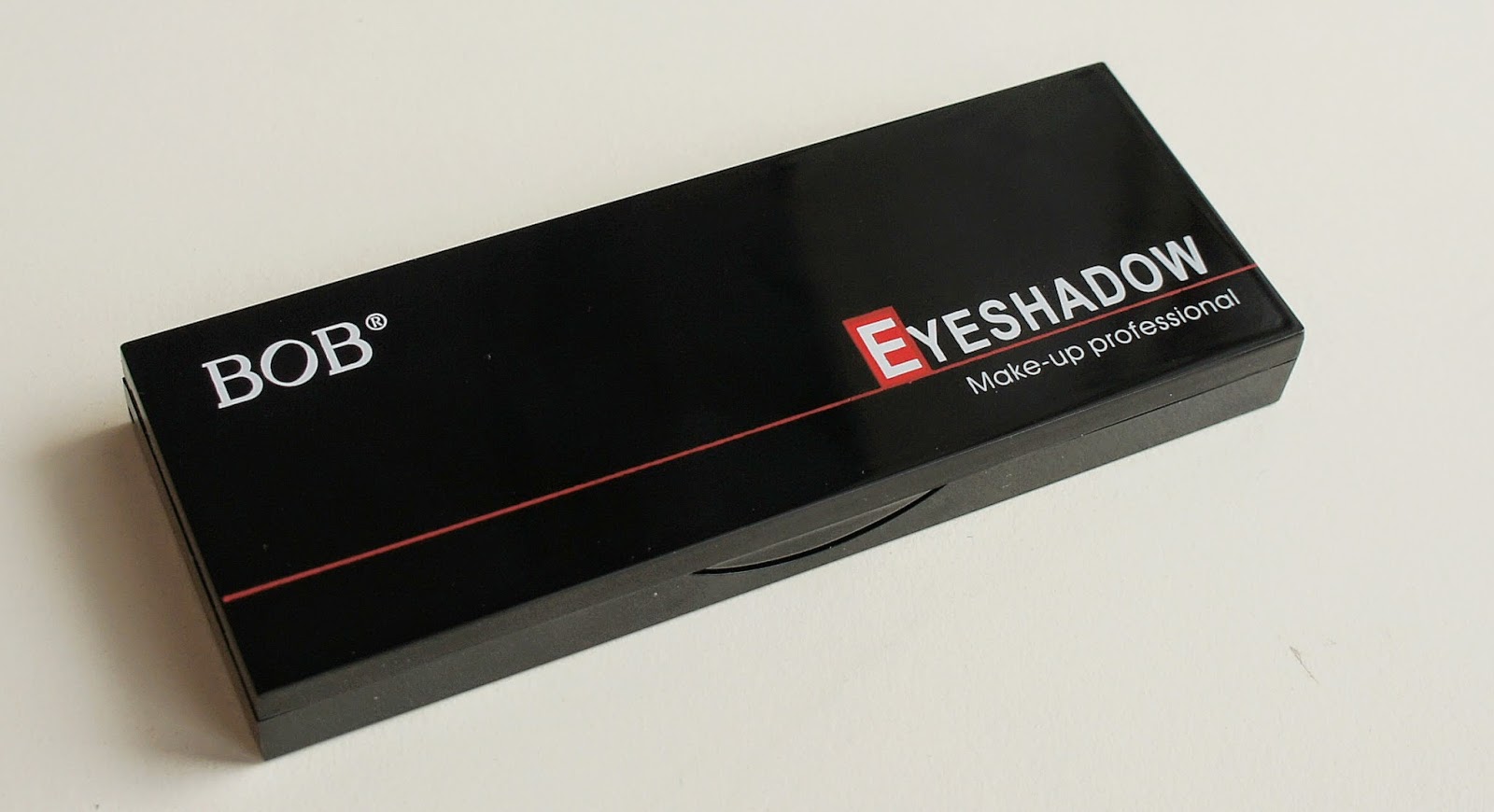 The case is black and glossy. To open the case you need to push it upwards~ 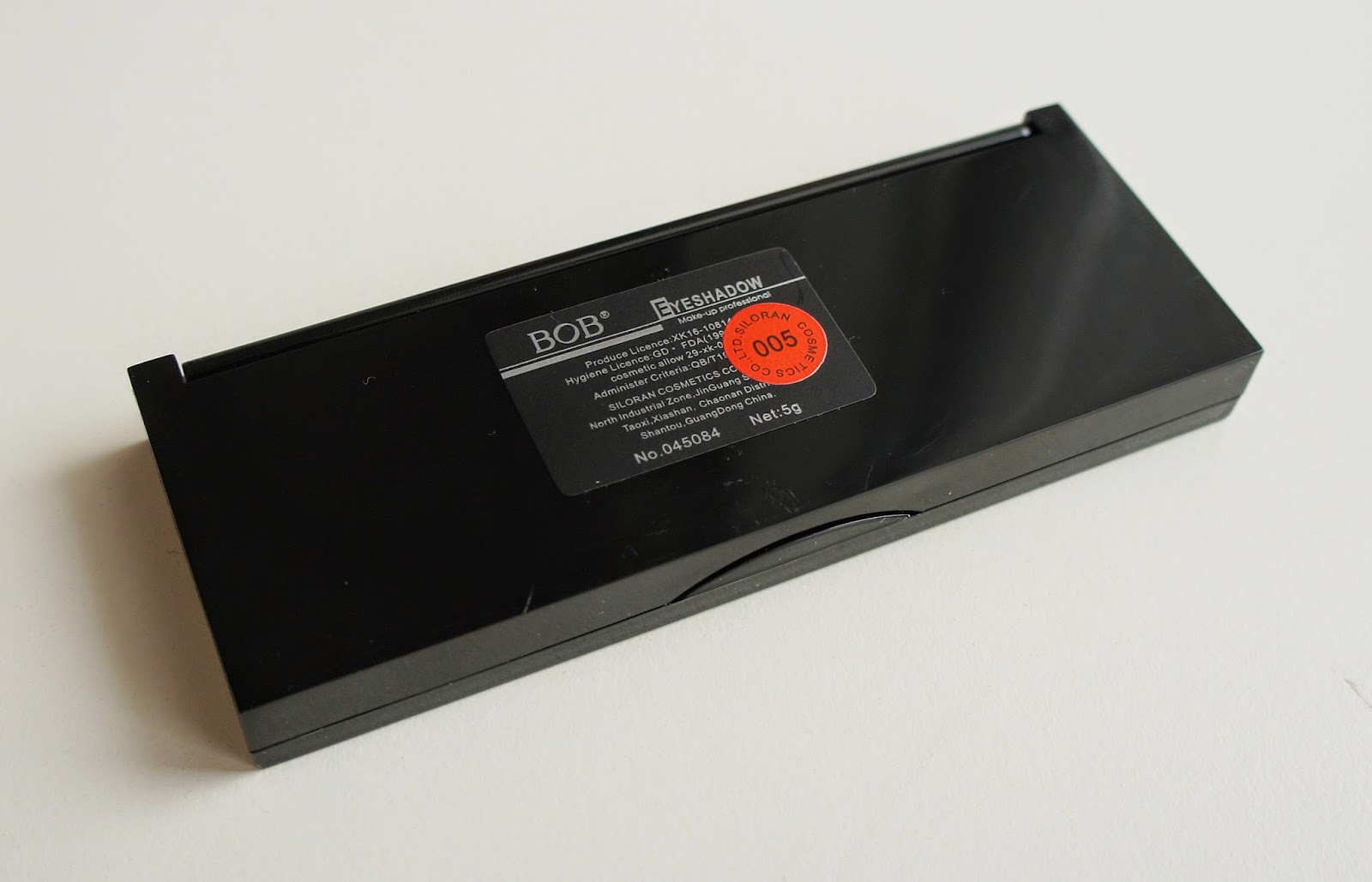 The package is really sturdy and seems to be travel friendly (I wouldn't recommend travalling with eyeshadow palettes because they might break D: ) Although this product is made in China I think the packaging looks really professional looking like it would be from an expensive brand. Maybe it's just me but the clean package of make up brands always makes me feel like that lol. 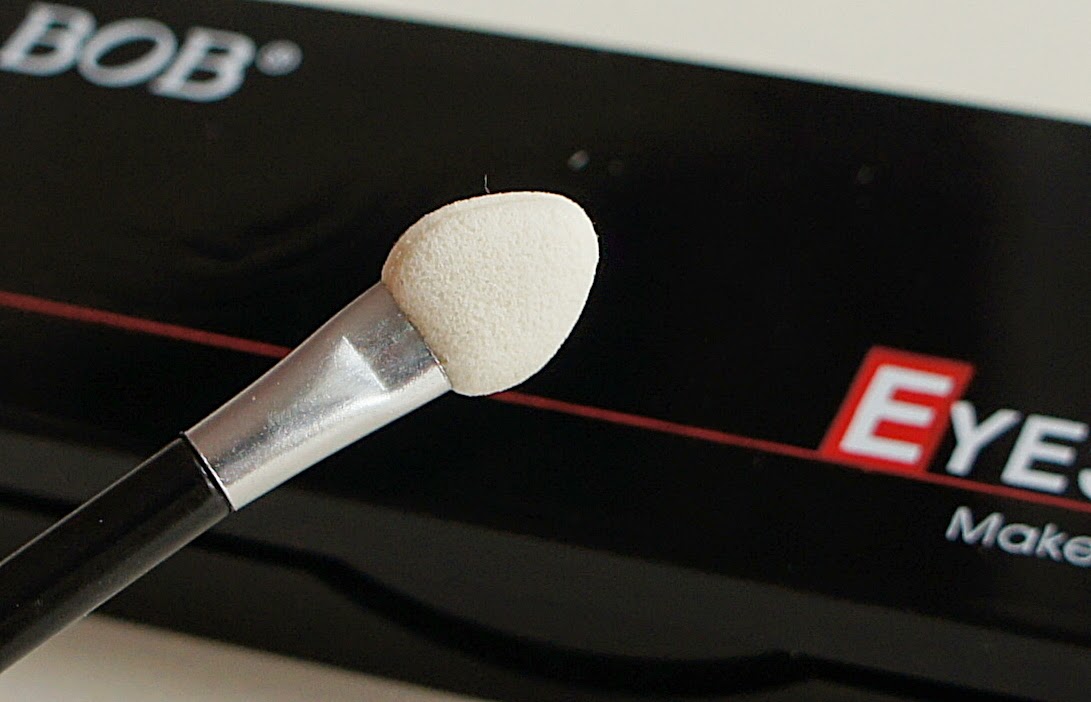 The eyeshadow brush they included is a sponge brush and it has an applicator on both ends of it. The brush feels reaally soft. It kinda feels like the brushes you use to apply liquid foundation or BB Cream on your face, I DON'T mean the cushion puffs! Click here to see what I mean LOL 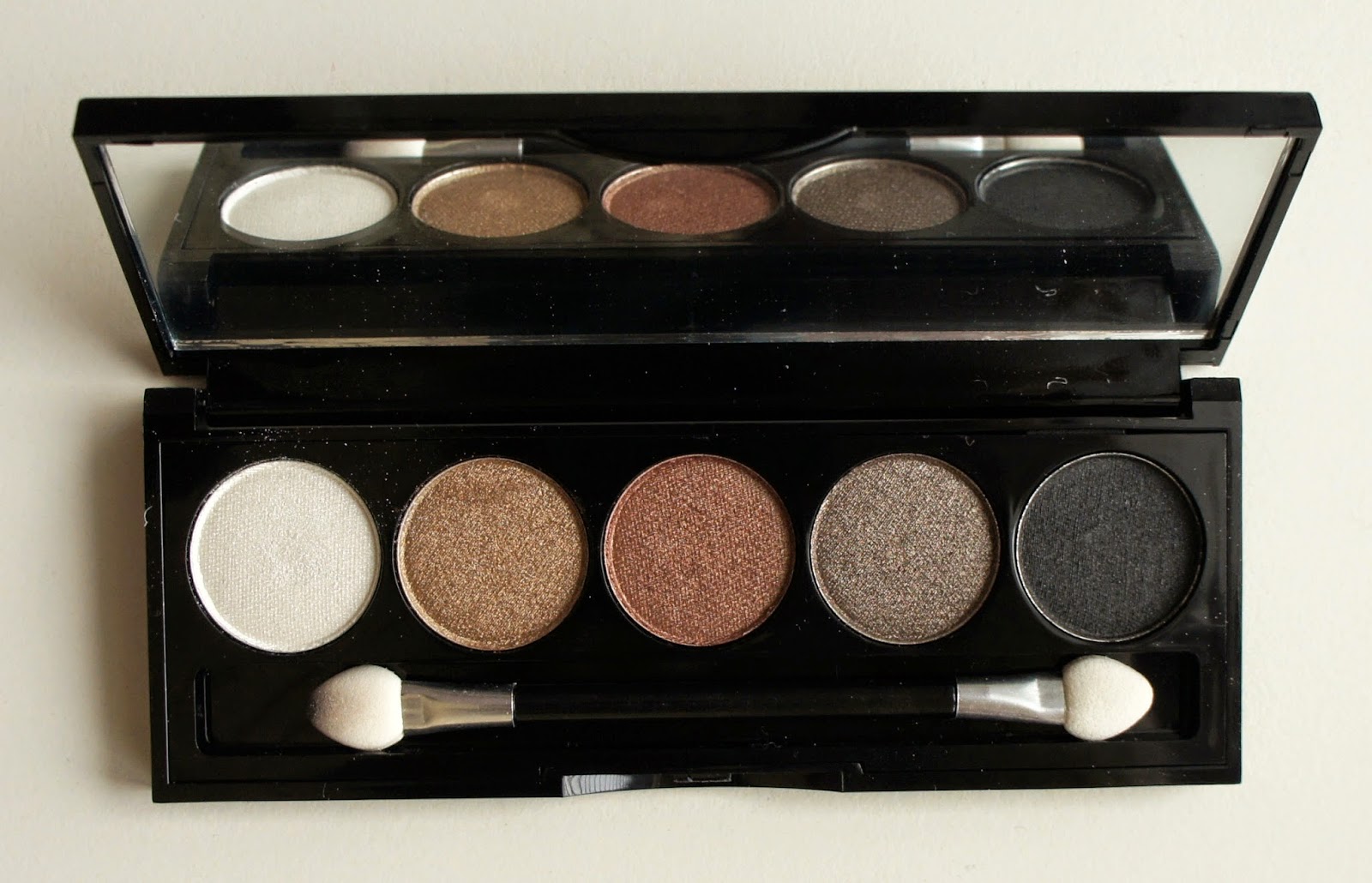 Here are a few swatches of the eyeshadow colors 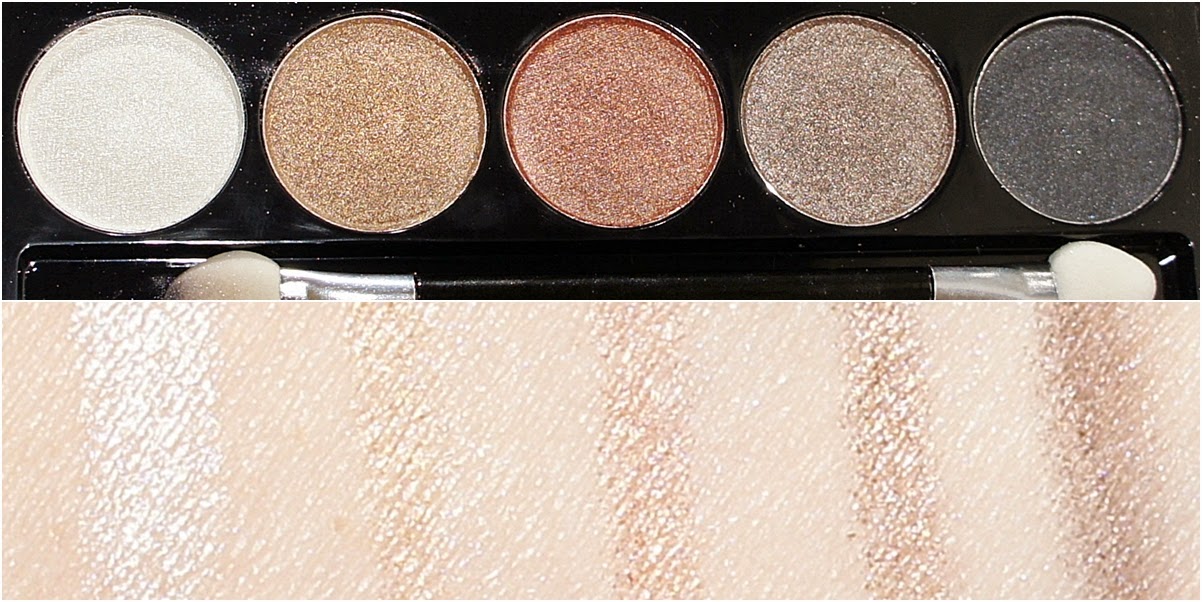 I feel like these eyeshadows are quite pigmented for their price. All colors are really pigmented in real life in my opinion except the black one! The black eyeshadow is really sheer but pigmented (maybe it's suppose to be a more grey tone but I don't think so). The other 4 colors do a good job and are pigmented but some are a bit sheer too (copper and black eyeshadow color). The white and brown/olive color are the most pigmented. The texture is not powdery.I can't describe it but it feels kinda creamy but it's not like a cream eyeshadow because it's not that sticky and thick. Well, let's just say the texture is awesome in my opinion and I'm happy it's not powdery because most cheap eyeshadows are usually super powdery and it's super annoying lawl XD

So I hope this review was helpful for you! I personally like this eyeshadow palette and if you're looking for really cheap and natural color shimmer eyeshadows I would go for it! But honestly, I would save up a bit more money and buy a super duper nice eyeshadow palette from an expensive brand because the colors are just too sheer for my liking and you need to stack them up to let the color show off.

But anyways, if you're interested in buying this product
you can get it here
Here's an introduction of Born Pretty Store [x] 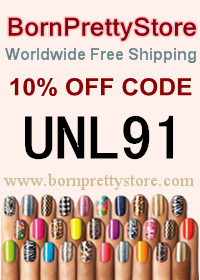 Please use my coupon code UNL91 for 10% off. I will be able to cooperate with BornPrettyStore for a Giveaway for you guys if you use this coupon code enough time at the checkout ♡
So, Happy Shopping LOL

Thank you for taking your time to read my review!  ♥
You can leave a comment below and follow me ♥

for the price, i dont think no one should expect this to have urban decay's eyeshadow quality lol it's not even half the price of its single eyeshadow. the eyeshadows are definitely on the sheer side but the copper is so pretty!!
ive been wanting to buy some stuff from bornprettystore but i literally dont know how to use paypal sadface so yea :c

This is actually a really great price and with such good quality! This store is a hidden gem! ^^ xoxox

It definitely seems to be decent quality compared to the price! Yay cheap eyeshadows ~

Great review Mindy! The packaging does look quite professional for a really cheap price :)
It's disappointing how the eye shadows are so sheer though! I agree I would probably save up to buy a more expensive but good quality palette like Naked or too faced :))

Oh and it's weird how the black eyeshadow doesn't look black at all in the swatches o.O

That palette is an imitation so the interior is in some impressions in Korean and has everything else written in Chinese. Sorry to say it, personally I do not like this type of pallets as not being a known brand not know the ingredients and that worries me because I have sensitive eyes and have had bad experiences with Chinese shadow palettes.

For the price of palette, it isn't that bad! It's a decent quality and I kind of like how sheer the color are (except for black) I love the color of the copper eyeshadow!

This looks pretty good for the price, shame about the colours being so sheer though :( Guess you'd really need a base on to make these wearable!

I bought this eyeliner :)

wahh the case looks so classy and professional!
ahahah lol I love the feeling of cushion puffs~ they are so softttt :D
the actual colour palette is really nice :D
thx for the reveiw <3
xxox Charmianeee

Aww the eyeshadows doesn't look that pigmented to me. But the third colour is very pretty~ :D
It's really worth it though looking at the price~ Thank you for the nice review!

great review [: i'd love to see more from you! nice blog too, keep up the great work!!!
and if you're interested, let's follow each other! do let me know [:

Its a shame that its sheer since the colours looks really good!

Yeah, maybe a primer or some BB cream on the lids before you apply it! This palette looks cool, but I think I'll agree with Sakuranko-- I'm a little wary of cheap products because my skin is so sensitive ^ ^

I think this palette is pretty and worth a try because the colors are pigmented but it looks like they're suppose to be this sheer because they're not powdery or anything D: but gurl, save up for the urban decay eyeshadow palette !! Maybe it's just me but I prefer high-brand stuff LOL.

yups they're pretty low price and the qualitiy is good, recommended if you're a cheapster haha, thanks for reading, Laura~ :3

It's really weird haha! But the other eyeshadows look super pretty irl and not that sheer as on the photos, I guess they turned out extra sheer because I used flash for the swatches T_T but watever haha. Thanks for reading and I agree, I prefer high-brand stuff over cheap stuff tbh too and would save up for a palette from urban decay or bobbi brown hehe

I feel you haha. If I had sensitive eyes I would probably stay away from this stuff too! I honestly would save up money and buy eyeshadows from bobbi Brown over this one too >~< Thanks for visiting my blog tho~

I like the colors except black too but I think saving up for a highbrand eyeshadow palette is better, I still use this palette daily though lol xD Thanks for reading, Mary :3

If you have sensitive eyes, I would not recommend this palette to you at all because it's from China lol xD But yups I will try to use primer to make them stay longer and for a better color show off :3 Thanks for visiting my blog to both~ :3

omg really? haha xD I think many people already bought this eyeliner because of the packaging, thanks for your comment :3

I think these eyeshadows are awesome for their price and i like the packaging too! But the brush included is NOT a cushion puff XD! Thanks for your comment though, Charmaine <3

well it's kinda confusing and I don't know how to explain it but they're kinda sheer and you need a primer for the color to have a good color show off but they're not powdery, can't say if that counts as pigmented lol XD Thanks for your comment though :3

Thanks for your comment, Gloria! I will check out your blog ! :)

yeah agree but they're not like super duper sheer just slightly, I would still say they're pigmented, the flash makes them look even more sheer T__T but watever, I still use them daily because I love them XD Thanks for your comment, April <3

Oh so lovely, that middle shade bronze is beautiful *0*

Thanks for visiting my blog so often, Emi! :3 I really appreciate it because I'm a fan haha

Born Pretty Store has so many palettes to choose from! This one is nice too, I especially like the middle one with the shimmery brown tone. Everything looks great besides the black one! :3

Awesome review ♡ ~ this eyeshadow palette really seems to be worthy! :) xx
I'm also in love with that super cute panda eyeliner ;u;

Thanks for reading my review, Tiffany :3 I agree the one in the middle is my favorite shade from this palette too!

Thanks for visiting my blog, Xi Qing :33