_
Hello my lovely followers! (*≧▽≦)
Some of you said that you would like me to post the giveaway post first so yup here it it!
It's the second giveaway I have ever held (if you don't count sponsored giveaways). I actually don't have a reason for holding this giveaway lol. I just went to Hong Kong last summer and bought stuff for this giveaway because I love all of you!! A few things are just stuff I don't use because 1. I don't like it anymore or 2. it doesn't fit me so why not give it away to someone who would love to have this stuff when I'm going to throw it away anyways!

This giveaway will be International because I know that most of my readers don't live in Germany. I thought that everyone should have the chance to enter!

So here's everything I will be giving away~♥ 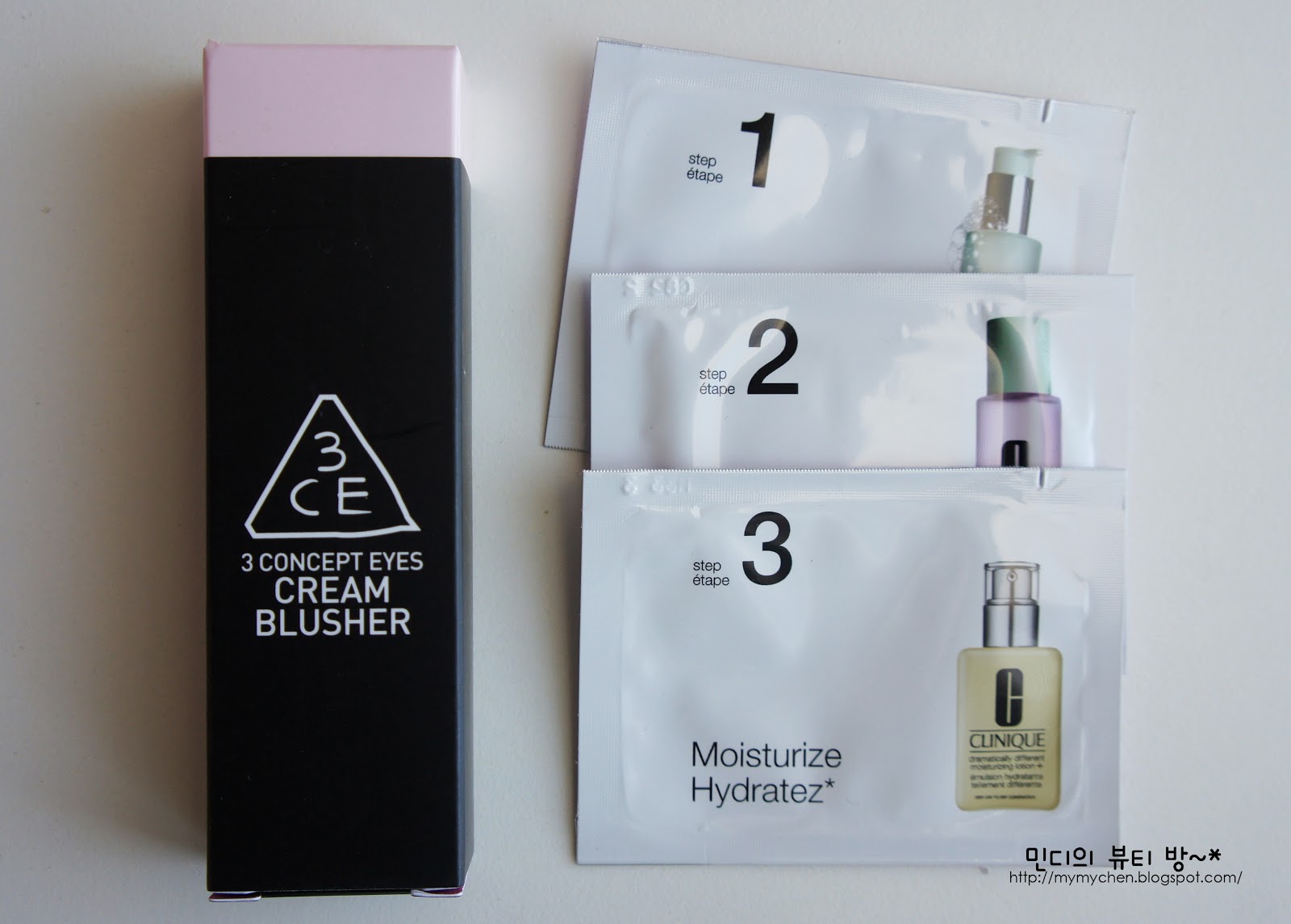 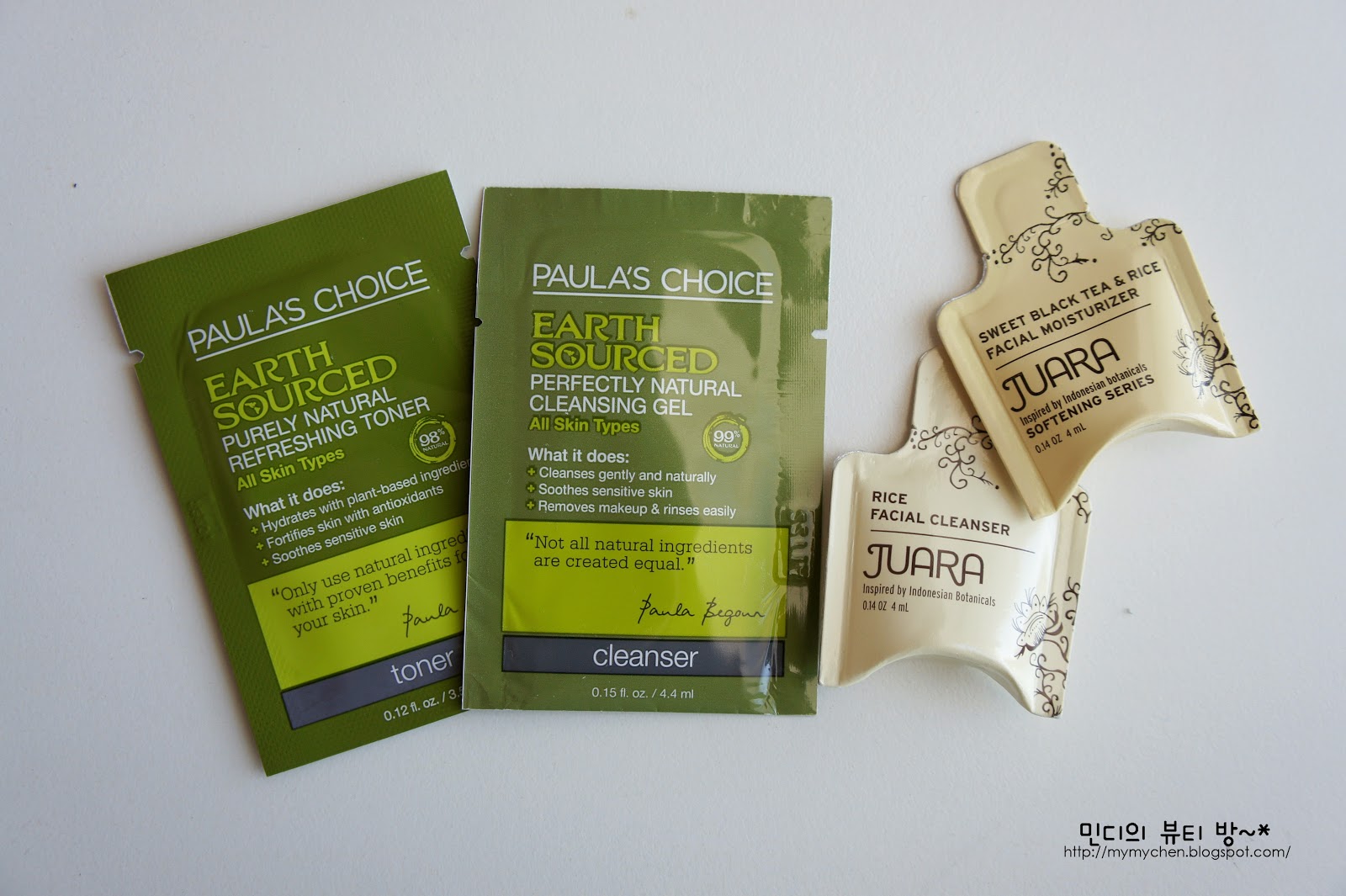 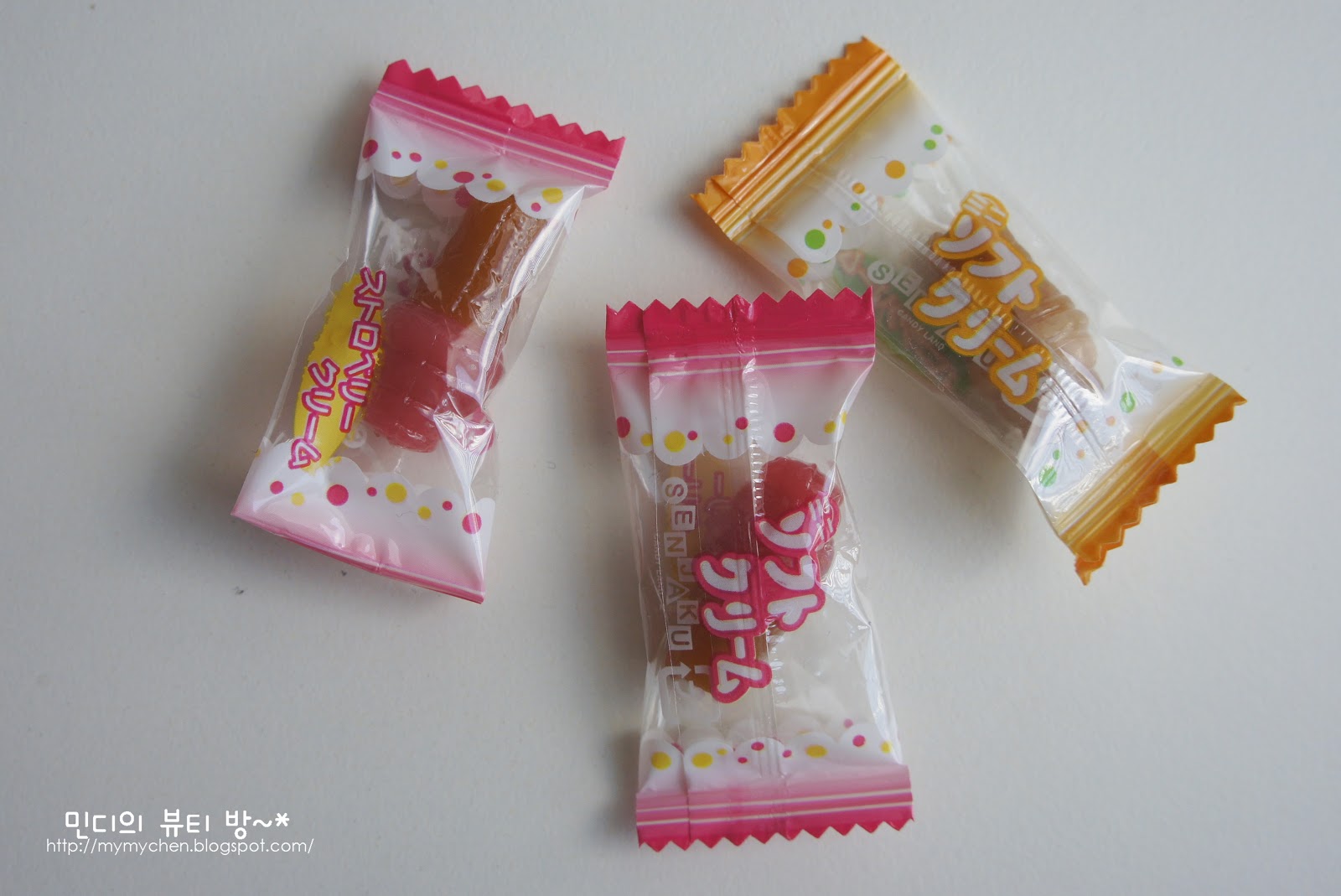 All products are unused and original. I purchased them a while ago but as mentioned above: I don't like or use them anymore. None of these products are expired. Everything's in brand new condition. The 3CE Cream Blushers expiration date is on 15 May 2017 so it should be in perfect condition! I honestly don't know when these samples were made because a friend gave them to me ^^;; but I think they should be fine as well~ The bonbons are purchased during my Hong Kong trip and the secret item isn't something that can expire hint: its jewelry! ♥

Let's get to the rules for this giveaway...

RULES
- Giveaway starts 20 December 2014 and ends 20 March 2015
- Must be following me on GFC or Bloglovin'
- Must be willing to give me your address (if you're under 18 ask your parents for permission)
- Do not cheat! If I see that you cheated 2-3 times I will delete all of your entries (yes I'm checking all of your entries!!)
- Winner must reply to the email within 24 hours or I will chose another winner!

I'm pretty strict when it comes to giveaway rules so do not cheat. I noticed that some people were cheating in my last giveaway. If you change your names or IDs on some networking sites where you were following me for this giveaway, please make sure to tell me your new ID or name via email or comment or whatever. Also, please be careful to enter the exact and correct information needed for that option without typos etc. LOL. GOOD LUCK ~ ♥


If you would like to enter this giveaway, please fill out the rafflecopter below~!


Here's the banner for this giveaway~♥ 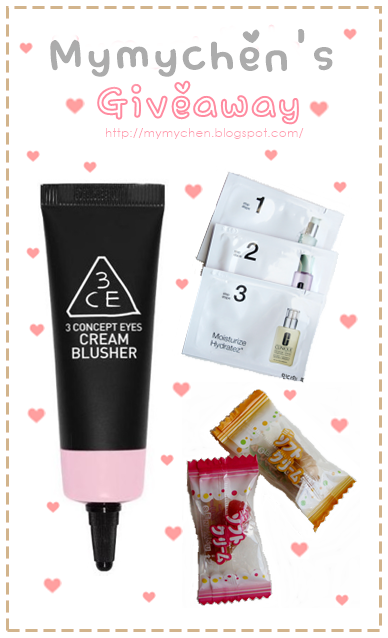 
GOOD LUCK to everyone~♥

Hey dear, thanks for hosting that lovely giveaway ♥ I have actually a lot of favourite books, but one of my first favourite books was lord of the rings :) My blog is Berries in the Snow, as you probably know already :D

Thanks for this cute giveaway sweetie~ My favorite book is The Little Prince by Antoine de Saint-Exupéry for me that is an amazing and beautiful book I can always lear new things with that book and is very special for me.My favorite song (that is hard because I have many favorite songs) one of my favorites is Every Little Thing - Time Goes By is wonderful.I hope be lucky thanks for inviting me to you giveaway.
xx

Joined your giveaway Mindy!! thx for hosting such a sweet giveaway!
hehe Would love to be able to win that 3CE blush~
hmm...I don't have any favourite songs!! (well I have to many to be able to call them all favourties lol)
BUT I'm also a huge AOA fan <3 I think one song I can never get sick of is U-Kiss 0330.
xx Charmaine

hey hey! Thanks for letting me know about your awesome giveaway! My current favourite book is Isla and the happily ever after and my favourite song is I will by cherish? I think that's who it's by haha. Thanks again <3

Hi, hmm... my fave book would be shopaholic series. My fave song hmm I dont have particular all time fave song though. Because my fave song is changing. But I love korean boygroup, 2PM and GOT7. You should check them! ^^

Hello dear!
Thanks for inviting me~ ^^
Since I love to sing, my favourite song is come from Disney named "Tangled" (Who doesn't love fairytale? hihi)
I love ballad song too, from 2AM - Over The Destiny. So touching and melt my heart :'D
And overall, my favourite kpop group is GOT7. Their song is just fit my ears perfectly, ^^
Hope you'll love it as well!

I'm joining!! Thank u for hosting this great giveaway!! Wish me luck><
my favorite song is (currently) jyj creation. I have too many songs to love, hehehehe.
and for book, ummm it's forever that harry potter series! It was really great with nice visualization!!
please have a nice visit to my blog (I'm totally newbie and can't have laptop for too long, so my blog is pretty messy)^^
http://ayeolsystem.blogspot.com/

My favorite book at the moment is Salamander by Patrick Warburton.

My favourite book is name of the wind by Patrick rothfuss!
My favourite song at the moment is anything Christmassy!! I love the holiday season!!!

My blog is pearls and swine at Rosamundmw.blogspot.com

Hi mymychen!! I missed you so much ; u ; It's been almost a year, I doubt you remember me...my favorite book would have to be The Little Prince and my blog url is tokki-autumn.blogspot.com Thanks for the giveaway <3

Yayy thanks for the giveaway!!! Giveaways are like christmas presents and I really get excited =))
I hope I get to be the lucky one =)
My fav book of all time is Pride and Prejudice by Jane Austen. She is my fav author!!
Ofcourse there are many songs but I enjoy listening Save the Last Dance for Me in every season, every age and every mood =)

yay i joined it Mindy! hoping to get it, been dying to try those blushers :D
btw i dont knw hw to "FOLLOW" your facebook ): but i'm under ur friendlist on facebook though :D i don't know where's the follow button but i think once im ur friend im automatically "following" you

btw my favorite book will be Harry Potter, hahaha you can't go wrong with any Harry Potter boooks :D
www.fatiguechic.blogspot.com

is my book comment here? i think it didnt sent tru
btw i like harry potter
haha u cant go wrong with that

hello Mindy! thanks for hold this giveaway!! ^^ my currently fav song is More Than Words by Glee Cast, hahaha i don't know why, but i love that song <3

mindy, i can not find your giveaway post on tumblr :(

Hellooo nice to join Mymychen's Giveaway. Hope I am lucky...

like with your arguments (This giveaway will be International because I know that most of my readers don't live in Germany. I thought that everyone should have the chance to enter! ) I come from Indonesia :-)

This is such a cute giveaway you are hosting plus it's really sweet of you to think about your international readers like this! Right now I'm really into girl groups and I can't choose a favorite song. Like Miniskirt by AOA and Mr Chu by A Pink are my go to songs right now!

I have many favorite songs but right now,I'm loving 5 Seconds of Summer's Amnesia.I really love this song.I hope to win this giveaway:)
Blog link:http://imdollyberry.blogspot.com/

Hi, I like a book which is 'If I Stay' and currently it is filmed into a movie which made me so excited and touched on the storyline. Hope you can check this book and movie too :P

hi dear
nice to meet you

my favorite song are Ost.FROZEN, Let It Go and dear good by avenged sevenfold.
for the book, I was not too interested, if the question is a favorite movie, I can answer it. my favorite movie are Final Destination, Harry Potter, Twilight, and avatar. I liked the movie are full of imagination.

My favorite song all the time would be Backstreet Boys - As Long As You Love Me. It's the most romantic song everrrr lolol.. I don't read much books, but the latest book I read was Heaven Is For Real by Todd Burpo. It's based on true story about a kid who met God in heaven. I cried a lot reading that one, and still gave me shivers as I write this comment to you :)

Well, I love the Rock and roll , I really love Misfits it's like my favourite band and my song I think that I don't have jajaja Can you listen Chance (Attaque 77) It's a really pretty song is in spanish :) my book well now is The Silmarillion and El lovo estepario (Der Steppenwolf) ;)

I have too many favorite songs to name! My current favorite is Sissy That Walk by RuPaul. It's my power song!

As far as books, I'm reading Fresh Off the Boat by Eddie Huang right now. It's his memoir of being a child of Chinese immigrants in America and being influenced by his Chinese culture but also having the desire to fit into American culture in early 90s Orlando, Florida. I live in Florida, and I was raised in a family that included essentially fresh over the border Mexicans, so I relate to it so much. It's a really great read, full of humor.

hi dear
nice to meet you

my favorite song are Ost.FROZEN, Let It Go and dear good by avenged sevenfold.
for the book, I was not too interested, if the question is a favorite movie, I can answer it. my favorite movie are Final Destination, Harry Potter, Twilight, and avatar. I liked the movie are full of imagination.

Thank you very much for this giveaway
I am very excited to follow
wish me luck.

My blog changed its name to : http://zulyasroom.blogspot.com/ (true)

thank you for having this giveaway!

anyway my fav books have got to be the Harry Potter series! and I don't have a blog >.<

Welcome to my blog!
http://tanyasoyer.blogspot.com
I have so many fave songs and books! But my fave book is Hunger games and songs....I think all songs by Ed Sheeran, BANKS, Tove Lo, Ellie Goulding and Bastille :)

My favorite books are Hunger Games and The Maze Runner trilogy. My fav songs are from Bigbang, 2NE1, Sandaime J Soul Brothers and many more!

Thanks for the giveaway!
My favourite book is “Three Comrades” by Erich Maria Remarque and
my favourite song at the moment is Take Me To Church Chords by Hozier.
http://zhoze76.livejournal.com

My favorite book is The Alchemist by Paulo Coelho <3
My blog: http://kollias-kollias.blogspot.gr/

My fav book is Peer e Kaamil (The Perfect Mentor) !!

My email id is isma_munir@hotmail.com

My favourite book is The Silence of the Lambs and about my favourite song, well it depends on the moments, in this period for example I really like caramel peach jam 120%
Anyway thank you again for this giveaway *^*

My fav book is "io uccido"
Ilaria_carraro@libero.it
I have not a blog

@Isma Munir: I still have to check every entry ( which will take a while) but the winner will be annouced in a few days when I'm done doing this. Thank you for participating in my giveaway! ♡

I would be very excited to wait dear @mymychen ^^